SOMERS, WI (March 22, 2022) – In April 2021, the Pritzker Military Museum & Library, located in Chicago, launched an international competition for the new Cold War Veterans Memorial to be built in Somers, Wisconsin, as a part of the Pritzker Archives & Memorial Park Center (PAMPC) project. After reviewing an impressive number of inspiring design concepts, Orbits has been selected as the final design of the competition.

Orbits is designed by Jenny Wu and Dwayne Oyler of Oyler Wu Collaborative in Los Angeles, California. From its formal structure to its shaped surroundings, the memorial emerges from the ground to become an architectural tribute to Cold War veterans, embodying the dedication, optimism, and hope that is emblematic of their enduring spirit. Collectively, the memorial unifies these complex narratives through juxtaposition, recognizing its interconnected history – one of sacrifice, triumph, and innovation.

“Each submitted design was remarkable and very inspiring. The final decision was tough, but after much discussion, we believe that the Orbits design will truly resemble a place where everyone who contributed to the Cold War will be honored. This memorial is special and very dear to many because people who sacrificed during this era are not recognized enough. Our goal is to make sure that our gratitude to these individuals is signified through this project,” said Col. Jennifer Pritzker, Founder of the Pritzker Military Museum & Library.

The Design Competition was a two-stage juried process. Stage 1 was an open call to submit design concepts for the memorial. In Stage 2, the finalists evolved their concepts for the memorial to create fully defined designs. The design challenge was to provide a conceptual design for the Cold War Veterans Memorial that embraces the mission statement, exemplifies the guiding vision, and achieves the design goals authored by the Cold War Veterans Memorial Steering Committee. The finalists rose to the challenge and submitted designs that showed their passionate exploration of how to portray the scale and complexity of the Cold War for current and future generations.

As Dwyan Oyler and Jenny Wu stated in their submittal, “In recognition of the profound complexity of the Cold War, our design draws from a range of meaningful artifacts and imagery from the era to create an immersive experience — evoking a range of cultural associations organized as a set of circular ‘orbits’ through the landscape.”

The Cold War Veterans Memorial’s guiding vision is to create permanent recognition that stimulates ongoing thought and study that honors American military members and civilians who served and sacrificed during the Cold War era (1945-1991). In line with the Pritzker Military Museum & Library’s mission, the Cold War Veterans Memorial aims to increase the public understanding of military history and how its lessons have contributed to the history we create today.

“We are extremely honored to have received so many submissions from such talented national and international designers and seen the professional skill the finalists brought to the second stage,” said Susan Rifkin, Pritzker Military Museum & Library Interim CEO.  “We are really looking forward to working with Jenny Wu and Dwayne Oyler to create a memorial that honors the lives and legacies of those who served and helped during the Cold War.”

The concept Orbits by Oyler Wu Collaborative received the unanimous recommendation of the jury as the selected design and the design team. In their summary report, the Jury said the imagery of this concept invites discovery, the setting is respectful of the site, and a variety of paths and experiences can be explored and provide a palette for interpretation.

All information on the design competition can be found at coldwarveteransmemorial.org. 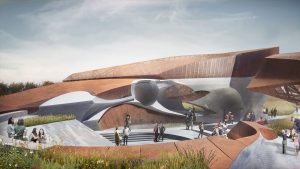 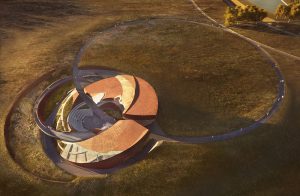 The PAMPC was created out of a need for additional space to house some of the circulating book collection and the archival collections of the Pritzker Military Museum & Library and will be completed in phases over an estimated ten years.

The first phase of the PAMPC project will include the Pritzker Military Archives Center to house the collections and provide workspace for the continued curation for future exhibits; Commercial Archives based on demand where private collectors, public institutions, and others may store their archives; a facility specializing in firearms education and training; a Community Green Space expertly landscaped with walking and biking paths; and the Cold War Veterans Memorial.